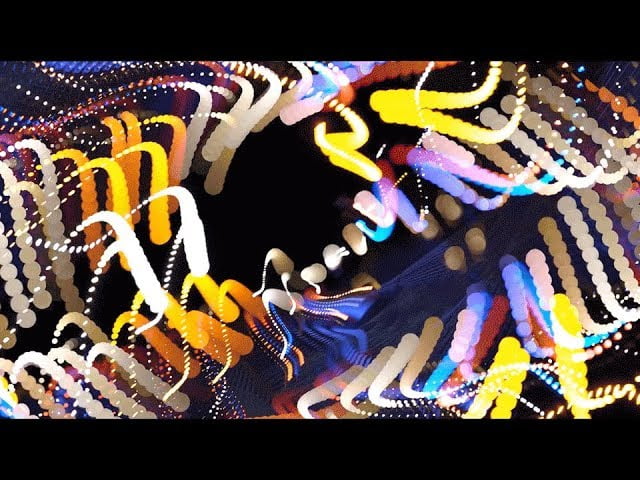 Featured on the new EP ‘World Passing By’.
Out now: https://lnk.to/WorldPassingByEP

If you’d like to receive exclusive music, mixes, video and news you can sign up to the site at www.maxcooper.net/#join

Max Cooper:
“I had a lot of high speed train journeys recently and I love watching the wires seemingly dance around outside the window. I wondered if we could be getting fooled by a similar process during our usual experience of time, and thought it would be an interesting project for a music video set to the music created during the same journeys.

The wires outside the window are static but they appear to move because of our motion past them. Perhaps our usual experience of movement could be explained by a similar process, where time is a physical dimension into which everything grows, with the present as the surface of this inflating structure. It ties in to a lot of physics ideas which are very common, and I thought it could make for an interesting music video, if I could find someone who might be able to pull it off!

Luckily for me, one of my favourite visual artists, Kevin McGloughlin had already been experimenting with linked techniques and ideas, and he’s gone to town on it with a multitude of techniques and editing precision to create something pretty special. And yes, there’s certainly a nod to the original time-stretch slitscan effects of Kubrick’s 2001.

I wanted to show the transition from our normal experience of time to a stretched out past as a physical structure when viewed from an alternative perspective outside of the dimensions we’re usually constrained to.

One other interesting thing about this model of time is that it helps with some mind-pickling metaphysical conundrums around the sense in which the past exists. In this model it literally exists out there behind us as a physical 4D structure. If we could travel outside of our growing surface somehow and went back to the past it wouldn’t be much fun though, we’d just find solid lifeless stretched out versions of ourselves.

For the music I wanted to bring these ideas of frozen moments of the past into play, and no better excuse to get stuck in with the Prophet 6 on some lush classic analogue synth sounds for the main chord sequence, and plenty of nob noodling for a dance of modulating sounds around the main sequence. I wanted to keep it fairly sparse to let the chord patch be central, and just focus on trying to make every element, including the percussion, warp a little, so you can either listen to the track from a distance and hear the harmonic ideas, or delve in to find all sorts more hiding in there. Kevin did an amazing (and painstaking) job of warping the video to sync with the audio detailing.”

Kevin McGloughlin wrote about the project:

Max Cooper and I discussed ideas about space-time before embarking on the Resynthesis project.
We were on the same page for the most part, though, working with Max is always insightful and he enlightened me with some really fascinating ideas about space – time.

I was delighted to once again collaborate, especially with reference to ‘time’, which is such a relatable and unavoidable part of everyone and everything.

The track is really beautiful, I saw the visuals in the music quite clearly from the offset.
I could hear the ‘time stretching’ in the melodies and synths and I was greatly inspired by it.

My aspiration in this piece was to create a journey for the viewer, a passage through space and time, in an effort to represent time as a dimensional structure.

I aimed to convey existence as a solid component of time, an effort to glimpse the idea that our past still exists out there in a stretched, distorted dwelling..

I wanted to capture a human / mortal essence of time, displaying brief impressions of human interactions and activity, traveling in time.

All the fundamental assets were captured employing photography and realtime footage.

I stretched time in both 3d and 2d space using a wide variety of time displacement techniques, ranging from ‘in camera’ work to quite laborious post production work.

Most of footage/photography was shot in Dublin Ireland, with additional shots from Co. Sligo.

Working with Max always makes for an interesting time.