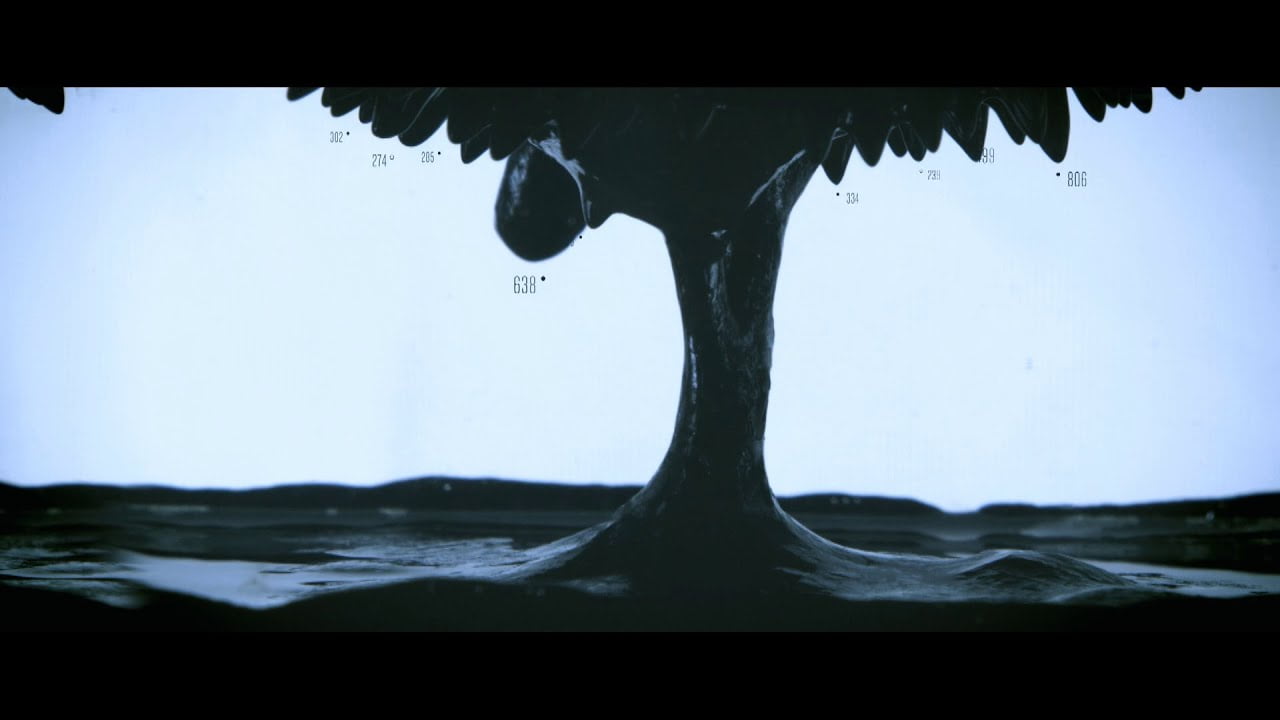 Origins is part of my new Emergence audiovisual show. It examines how everything comes from (almost) nothing – how simple laws create complex, fascinating and beautiful outcomes. Origins shows how electromagnetism – one of the four fundamental forces, helps create the types of cell structures that allow life to emerge.

What you see is water mixed with an oily ferrofluid. Because their charge properties are different, they cannot mix – each repels the other. But when forcibly mixed by mechanical or magnetic forces, the result is that spheres form of one fluid inside the other – basic cell-like structures. All living cells today exhibit this same natural property of being encased in molecules that form a barrier which repels water, and it’s possible that the first cells arose through the sorts of processes shown in the video.

The inclusion of a magnetically influenced ferrofluid isn’t needed to yield these basic cell-like spheres, but provides a great way of manipulating the fluids for the video. And it looks cool.

Origins is one chapter of the Emergence story for which I have worked with many different animators, musicians and some mathematicians to put together a full length audio and visual live performance. Each part of the story involved an interpretation of the ideas so that we could present them in a beautiful and abstracted, but still meaningful manner. I didn’t want to start from the big bang as would be the usual, but to look at more fundamental form from which everything could stem from – the structure of numbers themselves, shown via Riemann’s zeta function, the Sieve of Eratosthenes and Sacks spiral. The story then progresses through ideas of dimensionality, eventually the formation of matter and the universe, stars, planets, the beginnings of life, evolution, plants, animals, humans and all the way through to modern society, the capitalist machine and information era.

I wasn’t sure how to approach the origins of life section, and originally was asking for an evolutionary-themed competing cells video. But when I saw the first tests of Rabbit Hole’s ferrofluid work I realised that we were looking at something much more fundamental – how natural materials and forces can produce the first sorts of structures needed to initiate early life.

Most of the footage you see is rotated 180 degrees to make the movement more striking. We experimented with several liquids to try to create dramatic movement: from a ferrous liquid made from vegetable oil, water and printer tone (which didn’t work so well), to using kerosene, oleic acid and magnetised iron filings – all in a tiny tank the size of a coffee mug, with about four different magnets and an airpipe used to manipulate the liquid.

The video was filmed using a Blackmagic 4K Production camera with Nikon prime lenses to get in close. The final picture stitches up to three pieces of footage together, with all camera movement and zoom added during editing. This was our first music video, though we’ve worked with Max on his website and record covers before. Hope you like it!

There is also a brand new site dedicated to providing you with some new, unheard, music, mixes and remixes that won’t be available from anywhere else, all for free. If you’d like to receive this music you can sign up to the site at http://www.maxcooper.net/downloads