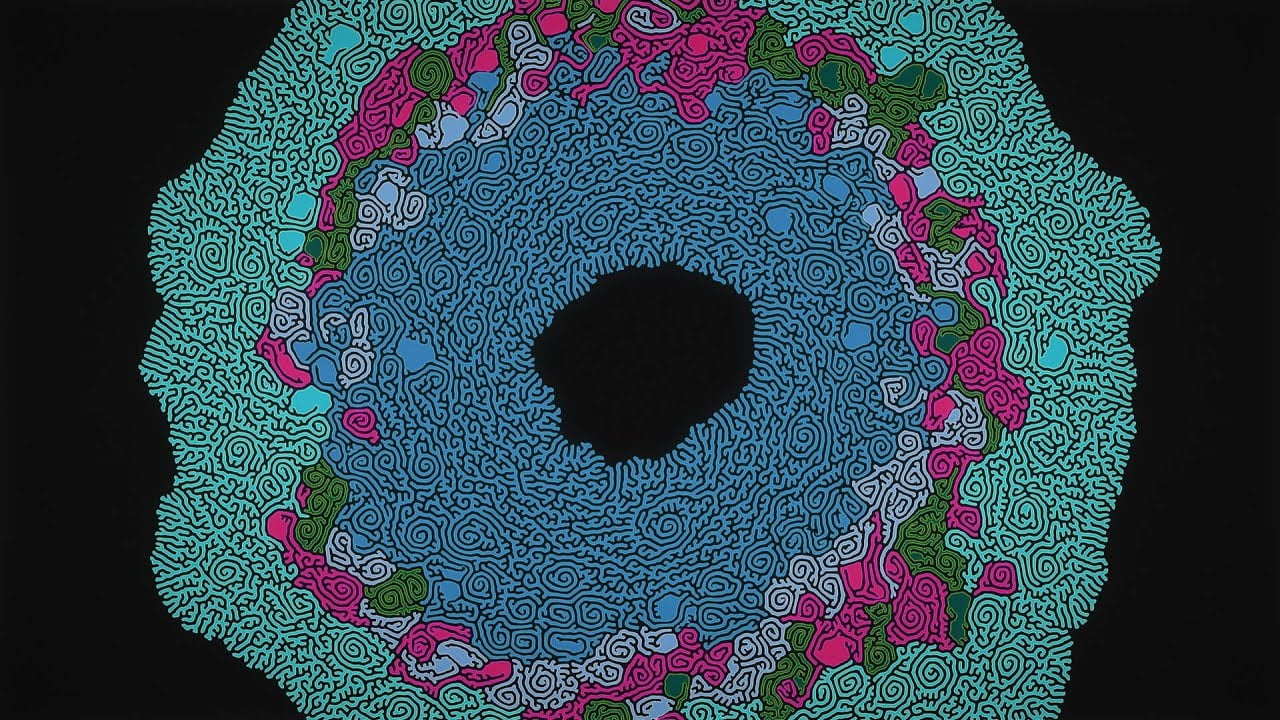 I’m really excited about this video project, after the first live show it was the part that everyone was asking about – It is a beautiful humanised exploration of life and emergence, by Maxime Causeret. I hope you enjoy it as much as I do!

The idea for this part of the story started on a day when there was really heavy rain hitting the roof window at my old flat. I got out my binaural mics and put my head right up by the window with the big raindrops hitting all around. They made nice individual percussive noises, with great spatial positioning, so I decided to use them to seed a piece of music.

This track is the most explicit representation of the idea of emergence in the album, because the rhythm of the track is created by the raindrops in an emergent manner – I took the audio samples, mapped the transients for the raindrop hits, and then forced the mapped points towards the nearest drumming grid positions. This meant that the random raindrops were pushed into a quantised grid, and the result was that a percussive rhythm emerged, one that I hadn’t created myself, but was the closest rhythm to that particular section of rain.

I then played the sansula over this rain rhythm, and added lots of pads and saturation layers, finally with some vocal snippets from Kathrin deBoer to complete the track. Maxime Causeret selected this track to work with, under the brief to map the emergent rhythm to an exploration of emergence in living form.

His video shows the raindrops initially, then going into simple cellular forms and then showing the important idea of cooperation between simple cells to form more robust colonies of life. This develops into a visualisation of the idea of endosymbiosis, where simpler smaller organisms can live inside larger cells, each providing a benefit to the other, and eventually forming parts of the same organism as they evolve to be entirely dependent on each other. The video also shows competition between organisms for resources, which spurs on their evolutionary development, as each species tries to keep up with the innovations of the others. He also visualises the emergent ideas of flocking behaviour, where groups of individuals form beautiful dancing-like patterns.

Maxime also shows us a section of animated reaction-diffusion patterns, where simple chemical feedback mechanisms can yield complex flowing bands of colour – these forms of system were originally thought up by Alan Turing, and were part of the early seeds of the field of systems biology, which seeks to simulate life with computers, in order to better understand the systems producing the complexity we see in the living world. They were also the starting point of my main research area many years ago before I got lost in music! (where I began with the question of what patterns could be produced via reaction-diffusion forms of system as opposed to gene-regulatory network controlled patterning).

So it’s a rich visual treat from Maxime on many levels, I can see why so many people were asking about it after the first live show. Lots more amazing video content to come over the next few weeks.

Some words from Maxime about his process (translated from French):

I firstly made a lot of small experiments with dynamic systems around my main idea of living micro organism. It was hard to then put everything together. It was now time to experiment with editing. I also ask for opinions, ideas and tests of few friends, specially Leslie Murard. Then i just have to do the real shots from my experiments.

In terms of tools, I work with Houdini. It’s a software which gives you a lot of freedom. You can easily customize tools or build your own tools. It’s famous for vfx but you have the same freedom with modelling or animation tools for cheap when you’re a freelance.
I always start with few sketches on paper for ideas. I also search for références drawings/photos/painting. In Houdini i try to setup something fast to Cook or at least fast to preview in order to animate the shots in good conditions.

The major challenge was to put everything together. There’s nothing very hard but it’s never easy to get something who “works” so it needed time to adjust things. This production was made this summer on 4 months but not at full time. I also had few other projects.